Getting raw, my real deal

It's a ritual. And this is year number five for our Positive Psychology program at UPenn. At the end of the year, we have a Quaker Dinner. This is a dinner where, when the spirit moves you, you get up and share a few words.

These were mine. Reflecting, refracting, and reliving.

I'm incredibly grateful for all the beautiful people in MAPP who helped get me through this year, and those four minutes. A special shout out to my girl, Zuzana Zilkova, who literally held me up on stage.

One of my questions for Positive Psychology was what's the most positive way to suffer? How does one positively lose? So far, what I've discovered, is that you must feel the pain in order to heal. It's inevitably messy and damn uncomfortable - especially for control/achiever freaks like moi. One of the best books I've read on this is Elizabeth Lesser's Broken Open. Elizabeth describes this as the Phoenix Process.

In Elizabeth's book she shares not only her own story, but those of others. She demonstrates the universality of loss. And she goes on to describe while shit happens to ALL of us - we try to hide it from one another, like it's a secret. Quick, get over it, move on, DO. But by hiding the secret of being human - to oneself and to the world, by trying to sweep the pain away, one can miss the most beautiful part of being alive...and that's letting a piece of you die, so that the rest of you can flourish.

After saying my few words, several classmates approached me and thanked me. Wow. For what? I was surprised. But then I realized. This talk was not for me...but maybe for others. Maybe, just maybe, by sharing my secret, I might be helping others live through theirs. And for that chance, I share this magnificently messy moment with you.

Here's to life.
Stella
Posted by Stella Grizont at 1:39 AM No comments: 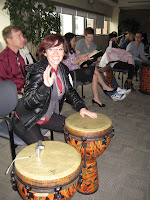 Play is being responsible in an unexpected way...it's about letting yourself own the moment to create whatever you want. You don't just follow directions, color in the lines...you risk into the uncertainty of the future - be it on an adventure, in a conversation, at work, or any experience of life.

Tonight I met for coffee (actually, mint tea) with Carrie Lobman and Janet Wootten from the East Side Institute, a radical movement away from traditional psychology.

I was asking Carrie how to wrap my head around play and instead of helping me put play into a box, she said, why don't you just play with how to express it?


Carrie Lobman, EdD is Assistant Professor of Education at The Graduate School of Education, Rutgers University. She is also the director of the Developing Teachers Fellowship Program at the East Side Institute. She is co-author of Unscripted Learning: Using Improv Across the K-8 Curriculum.
Posted by Stella Grizont at 1:17 AM No comments:

Breaking down in front of 50 people 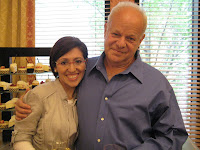 Martin Seligman, the founder of Positive Psychology, one of world's most influential leaders in psychology, witnessed me losing it this weekend.

Him, and about 50 other people.

It was the best experience ever.

Much love,
Stella
Posted by Stella Grizont at 12:19 AM 1 comment:

Blow Men Off No More...My Disco Epiphany to World Peace. 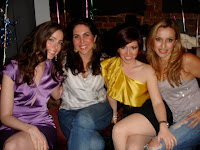 Last night I was celebrating my friend's birthday at an East Village spot. A great Whitney Houston song came on that triggered all females to jump up and dance. (Meanwhile, the men just looked at each other and said, "Who actually likes this song?")

Anyway, I happened to be in the back far away from the dance floor, but I couldn't resist getting down, even if it was all by myself. I was in my groove (yes, Stella got her groove back) when some very cute boy (literally) approached me. The exchange went something like this:

MY INITIAL THOUGHT: Does this boy even shave? Right now I'm not really feeling like being social. But let's see...I'll be curious and give him a minute to see where this goes.

WE CHIT CHAT FOR A MINUTE.

NEXT THOUGHT: He's obviously a nice guy and very brave for coming over. An 'A' for effort. If only you were 10 years older, this could be fun.

I SAY: Well, thank you so much for coming over here and keeping me company on the dance floor. It's very brave and sweet of you. I pat his arm, and give him the signal that we're about done. I sincerely meant what I said and I think he really received that intention. He looked at me appreciatively, gave a little nod, shy smile, and walked away.

I thought that went well and I felt really good about the exchange. It felt nice being nice. I actually felt like I did a good deed. No need to be a biotch if you're not interested.

That then inspired me to reach out to someone who had been pursuing me and who I left hanging via text. I'd been deliberating whether or not it was better to just not respond or to face the situation. Which would be less bruising to the ego? But after last night I decided that leaving someone hanging isn't a reflection of what I want to be about. If I'm about connectedness and the value of every human being - than being too cool for school is not the way.

So I contacted the guy and that exchange went brilliantly. It has now sent me on a kick of reinforcement that being nice is not only nice, but effective. In fact, being honest about my feelings with both guys made me feel closer to them.

I know my experience on the dance floor can't possibly compare to nations at war. But there is a kernel of grander truth that shimmered for me in the dark, dirty downtown spot, at 3am, over Whitney Houston...and that was golden rule. Perhaps the secret to world peace revealed itself to me in a profound way - as I practiced what I was taught since I was little - treat others how you want to be treated. If we all worked up the patience and the guts to share our differences and varied intentions out loud, with respect, and honesty, I think we all might feel more connected, more love, and even a little sexier.

P.S. Insulting someone actually activates their fight or flight hormones for 48 hours. Consistent highs in these hormones lead to all sorts of negative things like heart disease. So next time you're considering being mean, know that sticks and stones may break your bones and that words can actually hurt you. Be nice!
Posted by Stella Grizont at 2:59 AM 3 comments:

Can you see it? 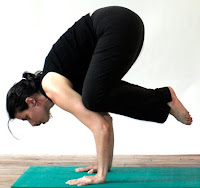 Here's a great article on how to achieve goals using imagery from Positive Psychology News Daily. One big point they make is that the thoughts we choose, if positive, are more likely to become a reality. Secondly, it emphasizes how the choice to create your reality is yours. Imagine your life as a movie and you as the director. You can choose to focus on whatever you want. Your movie has infinite potential - it's just a matter of whether you want to highlight the shit or the glory. This post also has some fantastic goal setting tips from one of my favorite ladies, Caroline Adams Miller, author of Creating Your Best Life.

By the way, I'm a total advocate of visualization for successful outcomes. It's worked for me and so many others I know. One way I use imagery is with my vision board. I have a 20x30 board with images that represent what I want to manifest in my life in the next year. I have this board above my desk and spend time looking at it everyday, getting excited about what's about to come into my life. Also, I spend time in the morning visualizing what I want to happen that day or in a certain meeting. I'll meditate briefly on these outcomes and muster up my feelings so whatever I'm imagining begins to feel really real. Sometimes when I'm without a book on the subway, I'll just spend time visualizing the details of the ribbon cutting ceremony of my next big venture. I see what I'm wearing, who is standing next to me, I practice my speech, I begin to get choked up because I'm so emotional and so excited and so grateful. I FEEL it and I SEE it. And I KNOW it's going to happen. Everything begins in the imagination - so visualize it.

It really works! It's easy. And it's fun. It's basically day dreaming but a little more strategic. You also don't necessarily need to give yourself that much time in advance depending on the activity. For example, on Friday, in yoga class, I used it before entering into the crow pose. I've never been able to master this pose until I took a few seconds before moving into it to actually imagine myself doing it. And then I did!

That's all for now.

Much love,
Stella
Posted by Stella Grizont at 11:37 PM No comments:

Lately I've been acutely sensitive to the fragility, uncertainty, and mystery of it all. Sounds so dramatic and cliche. But I was recently in a bus accident and thankfully it wasn't serious. But woah, how damn lucky I was. And am. That I'm here writing you. That today I took the bus and arrived safely. That my limbs and muscles work. That my brain functions, heart beats, eyes see, and ears hear. The other day we had a pipeline break in my area and we received an automated message to inform us of why the water pressure might be low. Normally, I'd take that for granted. And perhaps even be annoyed - "uhhhh, there goes my shower!" But instead, I thought, "WOW, how nice to know that there is a system in place to communicate such things and to fix them." And then, how about the fact that today I ate food, any time and any where I wanted. I'm lucky that I still have grandparents to call up. I'm lucky I have friends who wish me the best and send me positive vibes upon request. I'm lucky I several pairs of shoes from which to pick for the same occasion. There is so much abundance, and so much to be grateful for. I know not everyone is so lucky...but there's always something for which to say, thank you.

Gratitude is powerful and studies show that expressing and experiencing gratitude leads to improved mood, pro-social and moral behavior.  Not only does it affect the individuals receiving and giving the gratitude, it has a cascading effect that spreads (Emmons, 2003). It's contagious!

So consider this blog a positive infection. I hope you get it!
Posted by Stella Grizont at 10:36 PM No comments:

Want to receive e-mails of my posts?

Stella Grizont
Stella Grizont is the founder of WOOPAAH, a company that creates immersive play experiences for people at work to feel happier, more creative, and connected. Some of her clients include Google, Columbia University, and New York City's Department of Transportation. Stella was one of the first 200 people to earn a Masters in Applied Positive Psychology from the University of Pennsylvania. She uses this blog to express personal insights, some science based, some aha-shower based. Stella regularly speaks to universities and organizations such as MIT, NYU, Columbia University, The Learning Annex, MediaBistro, and the Center for Communication about how to launch your biggest dreams. She is a Small Business Correspondent for MSNBC and has been featured on The Today Show, Fox, Reuters, Yahoo News, and other media channels. For more about her read this blog which spills the beans or find her bio here: http://www.woopaah.com/team/